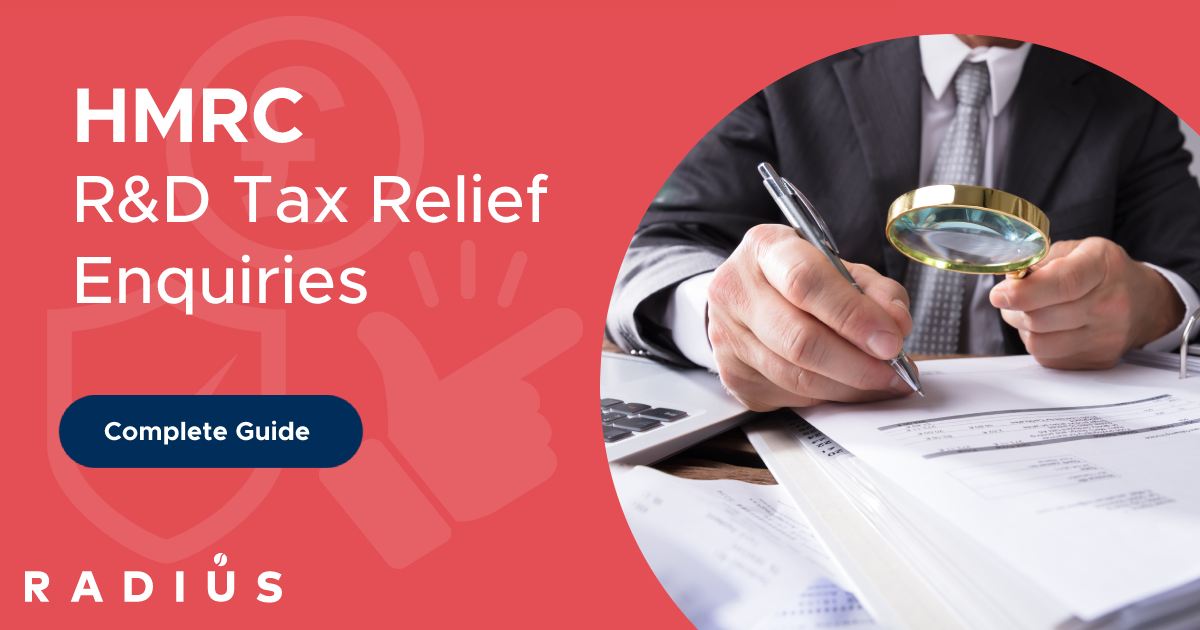 R&D Tax Reliefs are one of the most generous tax breaks currently available to UK companies, both large and small. The relief is generally worth around 25% of qualifying spend on R&D for SMEs. There is also an incentive available to larger companies, called RDEC.

The scale of the relief available to innovative businesses means lots of businesses submit claims to reduce their exposure to Corporation tax or cash in losses for R&D tax credits.

What is an HMRC R&D Tax Relief Enquiry?

An HMRC enquiry is a check of the R&D claim submission made by a company and that HMRC have queries on. The only way that they can ask questions is to open an enquiry.

These questions can result from benign or easy-to-rectify errors, a lack of information or in more serious cases, they may be in response to suspected fraud. As part of their enquiry, HMRC will attempt to gather additional information from the claimant about their claim, determining whether errors have been made, the nature of these errors, and whether additional monies are owed.

Why do R&D enquiries happen?

R&D Tax Reliefs were devised as a way of encouraging and rewarding businesses that invest in innovation for the benefit of science, technology, and the wider economy. Companies claim R&D Tax Relief through self-assessment, and HMRC enquiries function to ensure the scheme is not being abused.

HMRC have always enquired into R&D claims, but at a relatively low-level versus the number of claims being made. In recent years, HMRC has been facing a growing challenge presented by a large increase in the number of claimants, many that are perceived to be error strewn, both historic and current. As a result, they have started cracking down heavily on perceived abuse of both the SME and RDEC schemes.

Specialist R&D tax relief teams at HMRC have already been bolstered with an extra 100 inspectors. They are also continually introducing new strategies and technologies to enhance the efficiency of their enquiries.

HMRC deploys a process of risk-based selection for R&D enquiries, although there are also some random enquiries, meaning a perfectly robust and error-free claim may still be subject to an enquiry. HMRC have extended their processing times to allow them to review more claims and it would appear that software-based claims in particular are being targeted and the smaller size claims that may have “slipped under the radar” before this new approach.

There are some triggers which will raise eyebrows at HMRC if detected. These include:

What does an HMRC R&D enquiry look for?

If your business is submitting an R&D Tax Relief claim, whether independently, or with the help of an accountant, R&D boutique or other third party, there are several common errors that may trigger a response from HMRC following their enquiry.

How will HMRC penalise errors in R&D Tax Relief claims?

HMRC’s crackdown on errors in R&D tax relief claims does not just cover detection of them. They are also enhancing their ability to enforce the rules, prevent fraud and recover underpaid tax.

HMRC’s Fraud Investigation Service Team have been issuing letters to companies they believe have made fraudulent R&D Tax Relief claims and are setting up a specialist Anti-Abuse team just for R&D claims.

If errors are ultimately found in an R&D claim, HMRC will seek to recover any underpaid tax and consider if a penalty is due. Penalties are based on behaviours and whether “reasonable care” was taken by the company making the claim. Claiming “ignorance” of the rules or even using a specialist R&D provider is not deemed to have taken “reasonable care”, so it can be difficult to avoid a penalty once HMRC have identified errors in the claim. These can range between 30% to 70% of the tax claim value.

If HMRC suspects the errors identified were deliberate attempts to abuse the scheme, they may refer the case to the Criminal Investigation team at HMRC, in addition to issuing financial penalties.

How can you prevent an R&D enquiry?

Due to the fact HMRC has the right to enquire into any claim it is impossible to guarantee your R&D Tax Relief claim will not be selected for a closer look. Instead, your focus should be on ensuring your claims are sufficiently robust to pass any inspections that may take place.

This means making sure your R&D Tax Relief claims are fully optimised within the legislative rules set out by HMRC. It is important to ensure your claim value is maximised, but it is even more important not to cut corners or push boundaries beyond what is eligible.

We strongly recommend ensuring your claims are prepared by fully qualified, experienced specialists (not generalists), who have vigorous quality assurance processes to ensure compliance.

Most accountants are subject to Professional Standards, but many R&D Tax Relief boutiques operate without regulation, meaning there is greater potential for exaggerated or incomplete claims being prepared. If a claim seems too good to be true, it probably is.

It is also important to note that accountability for the claim sits with the company that submits the claim, not the third party that made the claim on their behalf.

How to get your R&D Tax Relief claims reviewed

If you are concerned about the compliance or quality of a current or historic claim, we strongly encourage you to get in touch for a free review.

The UK government is rewarding companies that are innovating in science and technology.

Our Essential Guide to R&D Tax Credits explains everything a business needs to know about the scheme.